This site uses cookies. By continuing to use the site, you agree to our use of cookies. Learn more about how we use cookies. Read more Ok

How is breast cancer diagnosed?
The process of diagnosing breast cancer includes three steps: an examination, imaging, and tissue sampling, where the final step is crucial.

Are mammography and ultrasound not sufficient for making a diagnosis?
No, the doctor cannot determine if a lesion is benign or cancer only by performing the physical examination. Mammography and ultrasound are good methods, but they alone do not provide a reliable answer. To confidently diagnose breast cancer, an analysis of cells and/or tissue from the suspicious area is needed. Hence, all lesions must be analysed based on cell or tissue samples.

What is a breast biopsy?
Biopsy means tissue sample. Breast biopsy is the removal of tissue or cells from a suspicious area in the breast.

Why are biopsies needed?
Breast biopsy is the only definitive diagnostic procedure that can determine if the suspicious area is cancerous. Apart from a reliable breast cancer diagnosis, biopsies also allow for:

How is a breast biopsy performed?
Previously, biopsies were performed surgically with an incision. Nowadays, breast biopsies are usually performed by a radiologist using a less invasive procedure, involving a hollow needle aided by a form of image guidance (for example ultrasound) to ensure that the sample is collected from the correct area.

How is a breast biopsy analysed?
The tissue sample is sent to a pathologist who analyses it (tissue structure and cells) under a microscope. The microscopic tissue analysis by the pathologist plays a central role in the diagnosis of cancer diseases.

Who performs needle biopsies of suspicious lesions?
In the UK, image-guided, minimally invasive procedures such as ultrasound-guided breast biopsy is are most often performed by a specially trained radiologist. This varies across different countries, of course.

Why is axillary biopsy performed on breast cancer patients?
In the axillary lymph nodes, the lymph is drained from a tumour area. The spread of breast cancer usually occurs to the first lymph node in the armpit, i.e. the Sentinel Node. Identification of the sentinel node is therefore an important part of breast cancer treatment.

If one of the lymph nodes in the axilla appears suspicious on ultrasound, the doctor will take the opportunity and directly take a tissue or cell sample with a needle. An early examination of axillary lymph nodes provides accurate information regarding lymph node metastasis and thus the prognosis and allows for planning the treatment optimally even before any operation is performed. These samples are also taken by a radiologist or gynaecologist and analysed the same way as samples from the breast.

What is a Sentinel Node Biopsy?
Previously, the operative removal of a breast tumour entailed the removal of all lymph nodes from the axilla as a standard procedure. The goal was to assess the cancer’s spread for making a prognosis and to plan the treatment optimally. However, this practice has several disadvantages for patients, including swelling, pain, reduced mobility of the shoulder, and loss of sensation.

Consequently, this surgical practice has been replaced by minimally invasive sentinel node biopsies using needles, a more limited intervention with a focus on diagnosis. The method relies on identifying and assessing the first lymph node that drains the breast tumour area, i.e. the  Sentinel Node. Only if a Sentinel Node biopsy reveals cancer cells will doctors recommend the removal of more lymph nodes in the operation. If the breast cancer has not spread to the axillary lymph nodes, a Sentinel Node biopsy can spare patients unnecessary discomfort after an operation.

Breast biopsy is tissue sampling from the breas 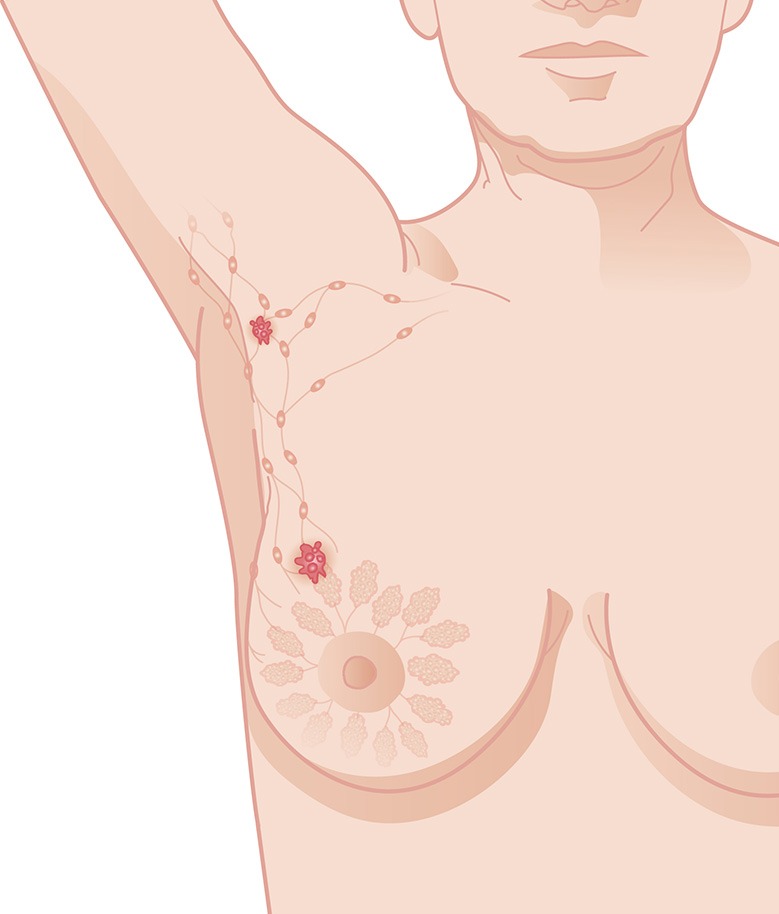