This site uses cookies. By continuing to use the site, you agree to our use of cookies. Learn more about how we use cookies. Read more Ok

Are there different types of breast biopsies?
Yes, biopsies can be performed surgically (by an incision) or using various types of needles.

What is surgical breast biopsy?
During a surgical biopsy, an entire or portion of a breast lesion is removed for examining whether the tissue contains cancer cells.

What is needle breast biopsy?
Needle biopsy employs one of several needle types to reliably collect tissue samples or cells.

Which breast biopsy method is the most common?
Until the 1990s, surgical biopsies were used to analyse parts of breast tissue. Today, needle biopsies are preferred whenever possible.

How does the operator know where to insert the needle during the breast biopsy?
Mammography images determine the need for any tissue sampling appointment and they also enable the operator to navigate in the breast tissue. Biopsies also employ additional image-guidance methods. Ultrasound is the most common of these. Stereotactic biopsy or MRI-guided biopsy are used in some cases. Stereotactic biopsy means calculating the depth at which a lesion is located by using two mammography images taken from different angles.

FNA biopsy employs a very thin, hollow needle attached to a syringe to withdraw (aspirate) a small amount of cells from a suspicious area.

However, merely using FNA to gain a simple cell sample (cytology), has the disadvantage that it is almost impossible to determine whether a breast cancer is invasive or "in situ" (cells that resemble cancer but do not show signs of spreading). Neither is the information from FNA enough for deciding on appropriate medical treatment.

The vast majority of ultrasound-guided biopsies are performed using a core needle. The CNB-needle consists of an inner and an outer part. The inner part has a sharp tip and a portion of the needle is gouged where the tissue sample gets caught when the outer sleeve is pushed over the inner needle.

Core needle biopsies have proven to be a good and reliable alternative to diagnostic surgery and their diagnostic accuracy is generally high.

One problem with core needles, however, is their limited space for tissue and the resulting uncertainty as to whether the tissue sample is actually representative.

Vacuum-assisted needle biopsy was developed in the 1990s to address the issues of core needle biopsies (CNB) (see above).

Similarly to CNB, vacuum-assisted needle biopsy (VAB) also uses two needle sleeves on top of each other. In the vacuum needle, however, the outer needle is hollow with a side-notch and a solid tip. The inner needle rotates and is moved into and out of the tissue to draw tissue into the sample chamber. Vacuum sucks tissue into the needle and into the container attached to the needle.

With a larger needle diameter compared to CNB and FNA, VAB yields a greater amount of tissue than a core needle. Several "suctions" can be performed during the same needle insertion and thus guarantee better sampling results. The great benefit of VAB is that the tissue yield during biopsy exceeds all other needle types and thus likely helps to avoid unnecessary operations. 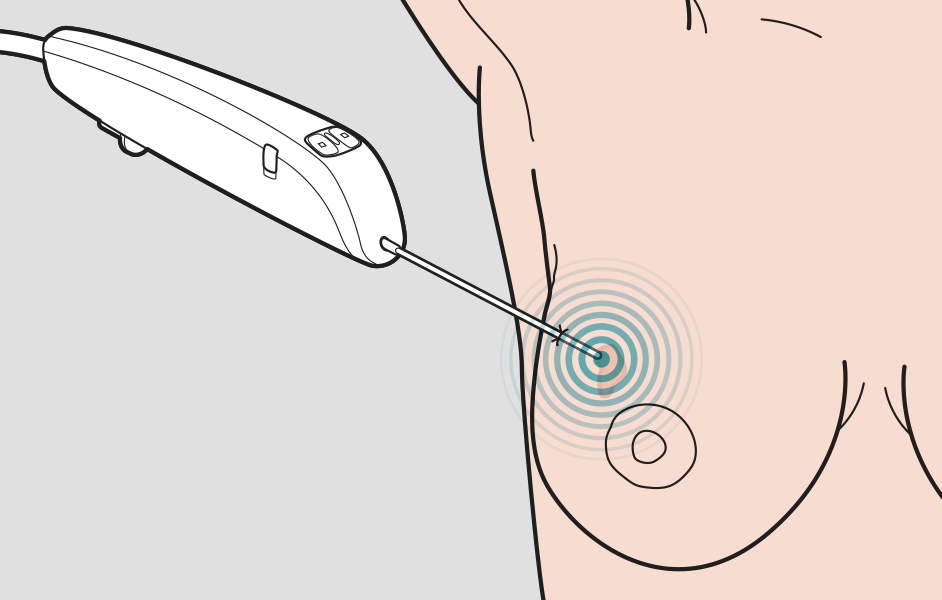 The biopsy needle collects cells or tissue samples during the biopsy.